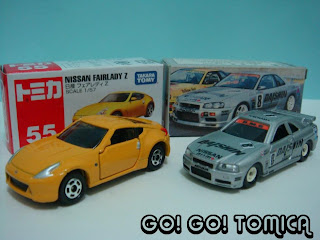 Tomica Duo (The Winners of the Comparo) 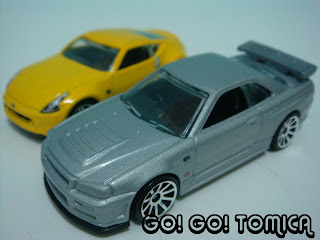 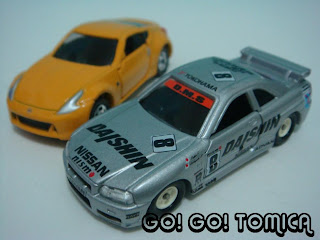 
This is a special request from a Hotwheels Trader friend. I never like to do Hotwheels comparo because it is quite pointless and nothing constructive to talk about. Something I observe about Tomica and Hotwheels I do like to share.

Tomica, the longer you keep, the value of the car appreciates regardless of whichever model. You will still get the same value or more if you sell it 5 years later. As for Hotwheels, it doesn't mean that vintage piece (even mint in blister) will fetch you good price. Many a times, even 80s Hotwheel mint condition can only sell at price of less than US1.00. The 80s Hotwheels that fetches good price are those Made in France and the 60s Made in USA Red Lines.
For new release Tomica, the value is the same as current series Tomica. For Hotwheels, the value will reach its peak when it is newly release and not available in a particular market. That allows scalpers to sell new release Hotwheels at ridiculous price to collectors.
Tomica, most cars (90%) are based on real cars, even those which has decals all round it are based on real cars. Most of the Hotwheels vehicles are imaginary cars, "monster" cars or real cars but accented with Hotwheels designed decals. I personally do not like imaginary stuff. What is the point of collecting something that doesn't exist?
Most Tomica available here are regular release, there are some limited edition (was 3000pcs and only available in Japan, not for export) made by minicar shops in Japan or some companies in Japan like Takashimaya, 7-11 Holdings, Kinokuniya, Daimaru etc. There are also special set like lotto series, toy project series (now 6000pcs or 10,000pcs) which are also available in Japan but produced in limited numbers. These are the more sought after for collectors. Hotwheels has the Treasure Hunt series to attract collectors, usually are those models which are not popular made into Treasure Hunts or Super Treasure Hunts. They do have some special set but not brought into the local scene.
Some similarities between Tomica and Hotwheels collectors started off with "Fast Cars". I will usually pop questions to them like, "How fast should the car be? Swift Sport? Civic Type R? WRX? EVO? GTR? Porsche? Lambo? Ferrari?" I find it queer as I start off with Limited Edition of 3000 pcs and Foreign series Tomica regardless of what vehicles as long as it is a car. I am more aggressively into vintage domestic series Tomica now which I do not fancy in the past as I do like foreign cars much more then. 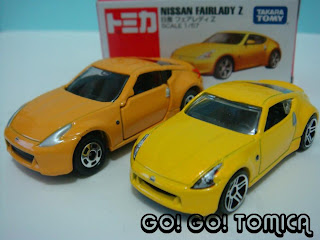 Tomica vs Hotwheels: Nissan Fairlady 370Z
The Tomica has a more accurate tone of yellow for the real car vs the bright yellow of Hotwheels. The only complain on the Tomica: They made the car too big again, oversize for Tomica level. However, the Tomica feels more like a Fairlady compared to the Hotwheels. I felt that the Hotwheels is made from a block of solid steel and indestructible like most Hotwheels. "Indestructible" is a minus to me, it is build more like a toy (I know Tomica is a toy too) and meant to last under hard playing. Major reason why it is like a block of steel because of simplicity for mass production. Tomica is not as solid as the HW as it can be easily flatten and breakable by use of a hammer. I remembered that my Tomica had bent axle and broken A-pillars under my hard playing. I think that will hardly happen to Hotwheels. 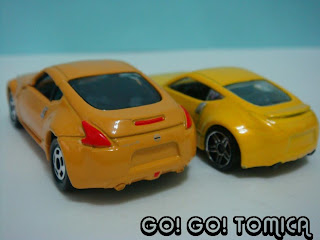 I appreciate that the Hotwheels did not paint the rear lights but the lines are not so defined as the Tomica. 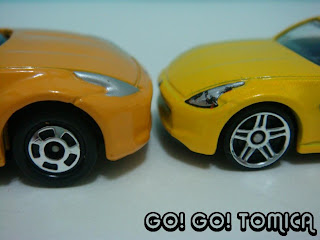 This is the largest button wheels I have ever seen and the Hotwheels maintain its standard by fitting the Fairlady with its usual ugly sports rims. I think Tomica might release a Fairlady with dish wheels for its special or limited series in the near future which happens for the 350Z. The 370Z looks better in dish wheels. Although the HW 370Z is a flop but the Tomica is not really fantastic too. Look closer and you will see its flaws. 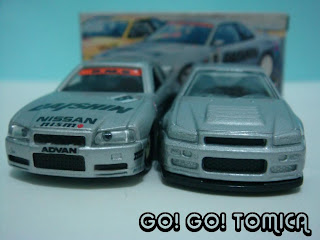 Tomica vs Hotwheels: Daishin Skyline GTR & Nissan Skyline GTR
Remember I announced Tomica being the winners at the beginning? I just want to cut the torture short just like how Argentina wanted the match to end early when Germany trampled them 4-0 in Quarters of South Africa 2010. The Hotwheels suffers from heavy quality issues like uneven paint, blotting paint, lousy detailing and wrong colour for spoiler. Honestly speaking, the Hotwheels cast looks all right, at certain angles, it looks nicer than the Tomica but the finishing totally destroyed it like a piece of junk. I am using this Tomica Daishin Skyline as it is also R34 and the only R34 I have in Silver. This is a Tomica produced in limited number of 3000 pcs only. 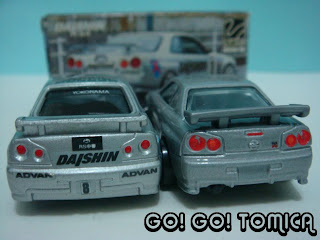 The Tomica R34 was released more than 10 years ago but the Hotwheels R34 was released in 2010. A little weird that HW released R35, then R34. Can they release a R31 too? I prefer R31 than the rest of the Rs. Being based on a regular Tomica GTR R34, the limited issued Tomica rear spoiler suffers from the same problem. The spoiler is not "trim" to shape, disappointed more than 10 years ago, so I shall not rub salt again. HW spoiler is plastic, nothing wrong with that but does it match with the tone of the silver body? 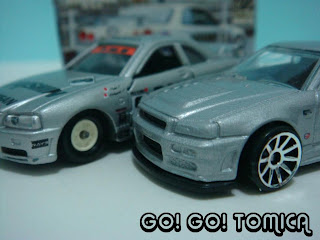 For the rims used, you decide. Hotwheels collector will agree with the Hotwheels but I will think Tomica has better choice except that it is undersized. 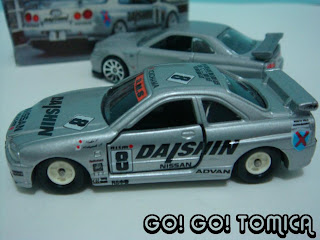 Ok, I know you want to see more of the Tomica, the overall Champion.