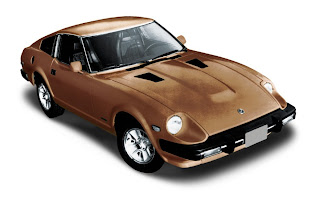 Fairlady begins its life as early as 1959 in the form of a roadster. The roadster represented Fairlady in the first decade until the Z car came along in the early 70s. It was the 240Z and it hit it well in the America. This 2nd generation Z looks much muscular than the 240Z. I think that the headlights looks distinctive enough and nicer than its predecessor. The traditional long nose is also an attractive Fairlady trademark. 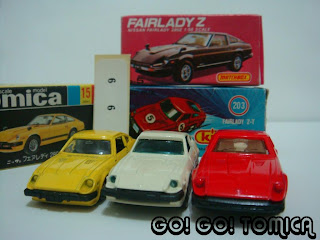 We have 3 cars with me today in this another Go! Go! Tomica comparo. We have the usual suspect, Tomica, together with Matchbox and Kingstar. 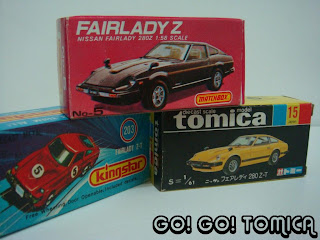 Packaging:
All 3 are housed in little paper boxes. I would say Tomica is being very consistent with its black and yellow box with a nice illustration of a real car. This Matchbox is a Japanese released so the box might look a little different from the regular ones. The box in blue looks rather familiar which reminds me of the Matchbox superfast series of the early 70s. Thumbs down for being lack of originality in design. If you are able to live past the shadows of resembling to Matchbox, I would say Kingstar is still a good buy. Well, at least it isn't pack in blister which is not really collector friendly. 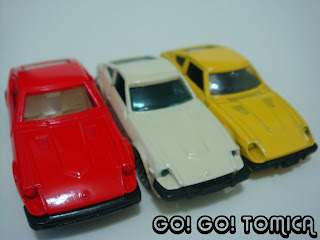 Obviously these are no Hotwheels as out of this world colour scheme and livery are not available here. 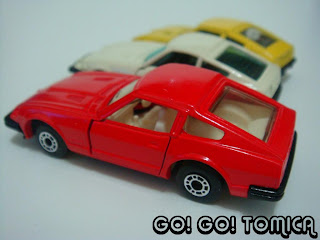 Being the largest car here, it is also the car with the most mass here. It will be great if you intend to sell the car as scrap metal after getting tired of it. I think this is one of the criteria most of my collecting buddies consider. I always ask them if they actually buy them to scrap rather than collect. This car looks really spartan in a way. If this is a real Fairlady, this must be the base model. It should or could be better considering it is a Matchbox (rather than Kingstar) mainly the detailing on the bonnet if you put it side by side with the Tomica. 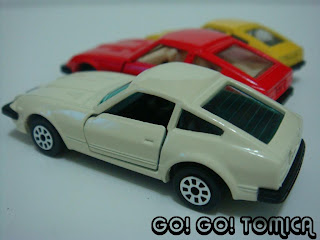 Although Kingstar is not in the same league with Matchbox and Tomica (in terms of pricing), I think it is a "reasonably priced car" that delivers better than a Welly or Yatming. The car has windows tinted in blue inclusive of its pair of headlights. It is a good intention but quite poorly presented although the other 2 cars do not have that feature. This is the only car here that include demister in the package. I supposed that is a luxury option in the 70s or early 80s? I still vaguely remember that the late 90s Thai built Toyota Soluna does without demister. This Kingstar is built at a budget like the Soluna except that it has a fake defroster. 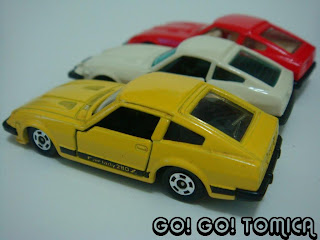 Tomica is the specialist in making Japanese cars. I almost take it for granted on that till I put it together with other makes like I usually do for my blog. The detailing especially the front of the car is so well done that it look so much like the real car from front 3/4 view. The overall profile of the Tomica is better proportioned as compared to the Matchbox and Kingstar. 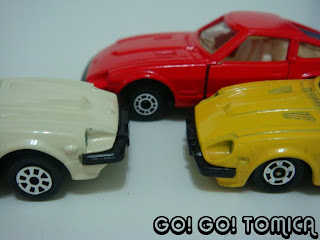 On The Move:
The Matchbox has a set of superfast wheels as its series say so. I have to say that I really hated this set of rims since I have my first Matchbox when I was a kid. I felt that justice is not done to the cars which are having these wheels design. They made the cars look very truck-like or van-like. They should have use the button wheels which are used in transition from Lesney to Superfast instead. The car does not really benefit from the set of superfast wheels in terms of acceleration. It moves like a truck if you head on with the Tomica and Kingstar.

Although I do not fancy Kingstar 8 spokes rims which is made up of triangles and squares but much better than the Matchbox. The Kingstar move swiftly but not smoothly, passengers will enjoy a bumpy ride as the car wobbles while on the move.

The Tomica moves willingly and smoothly in a straight line although not really fast like Hotwheels. Tomica is also the only one here that gives you a suspension. The suspensions of the other 2 cars are a tad too hard that it is as good as no suspension. I still prefer Tomica 5 spokes design wheels, don't really like the 4 spokes design. I know button wheels is a like it or hate it issue for some collectors (especially Hotwheels collectors). 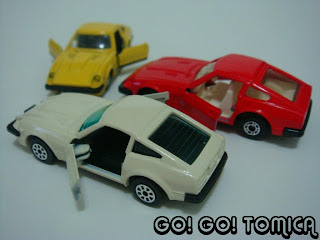 All cars has opening doors!!!! Ok, nothing to shout about. 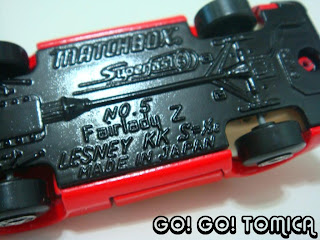 Matchbox as traditionally is well build in general. It feels good to hold as you can see that they use more metal than other 2 cars here. Paint quality is average but follow closely to the cars they represented. I realised they hardly use metallic colours unlike Tomica in the 70s. I do understand that cars then do not have metallic colours. Nothing much serious to complain about this Matchbox expect on the detailing and the ugly wheels. 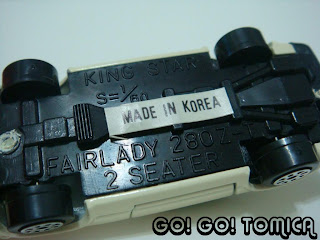 I swear that I did not stick that onto the base of the Kingstar. It is really made in Korea (South). For a low asking price, I understand that it is build at a cost constrain. If Kingstar are still made today, they should be in the same market positioning as Maisto. The Kingstar beats any current Maisto 3 inches but Maisto still survives and Kingstar is dead. 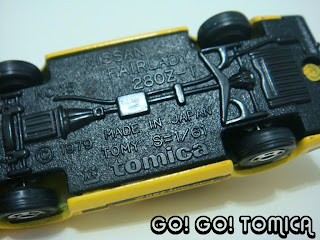 Tomica wins not just that it is built according to scale but to the right proportions too. I have to admit that some Tomica does look weird in a way. The other makers who are able to match that good qualities are the Schuco Modell and the Polistil RJ. No complains on this Tomica. 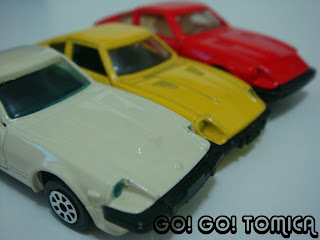 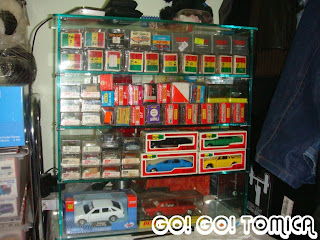 I am referring to the flea market our group had on a 3 to 4 monthly basis. My display case continues to display some of my cars before the next "season" starts. About this display case, I bought it in Tokyu Hands in 2010. For the sake of bringing in this display case, I bought a trolley as well because the display was sold in CKD form and the box is HUGE. My room is in a mess, gotta to pull those hand brakes on my toy shopping. I am hoping for the next season to arrive soon so that I can slow down the growth rate to avoid over population. The population growth and population density is becoming more and more Singapore. Small room, huge population and continuous influx of foreign imports. With little storage and shelves, I have to crack my head to free up some space before I vote myself out of the room like my friend, Pooh. My "foreign talents" are mainly Japanese, the others staying here are Germans, English, Italians, French, Spanish, Greeks, Koreans and many more. There are also a huge population of Chinese-born-Japanese who are permanent residents in my room while 10% of these are transiting through my room to the flea market. Not too long ago, Vietnamese-born-Japanese arrived too. There are the Thai-born-English who came in numbers within a short period but for the past 1 year, I managed to resettle more than half of them. What about the Malaysian-born-Americans? They are used for "transition" only because my little state doesn't really welcome them. Where are the Singaporeans? I do have couples of them but population stay low at less than 20. I am trying to get more Singaporeans but they are really rare breed out there. Some of them are staying in prime areas in my room. Anyone like to deport some Singaporean Mandarin to me? Text me please.