I have to say 2018 is an exciting year for Tomica not just because they release 2 Ferrari but there are also many exciting models released. The quality of casting are improved as well as compared to past years. I really have much difficulties to choose the best for this year. I am already speechless as it's really hard to choose a winner. Let's get started. 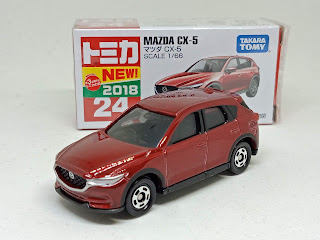 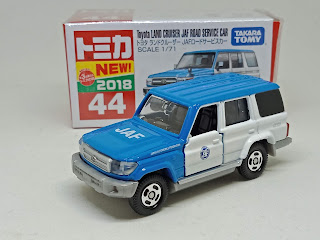 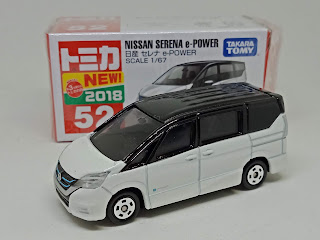 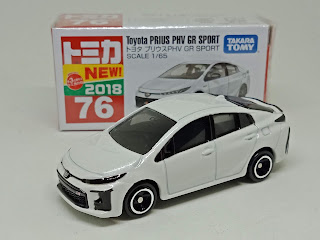 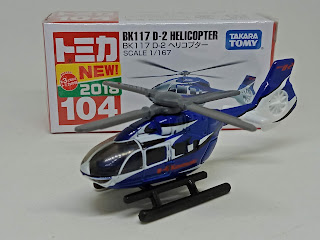 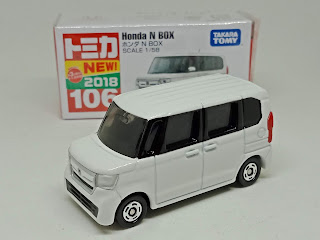 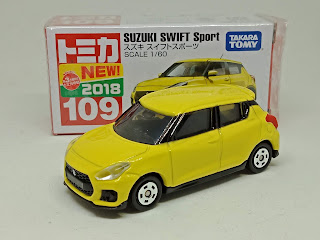 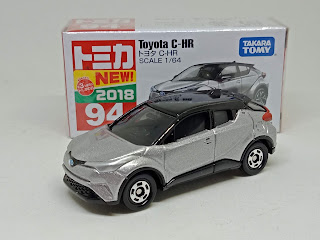 I have to eliminate 8 cars in round one mainly due to painted windows. I guess no explanations required if you have been reading my blog. I don't really fancy Nissan Serena and yet they did it again with a e-Power variant. I was actually hoping for something new if they knew that this model won't be a blockbuster. The Swift Sport is a must make for small car enthusiast let down by the rear painted hatch. It is really hideous but luckily not many were sold here in Singapore (the real car) and so lesser sulky faces. 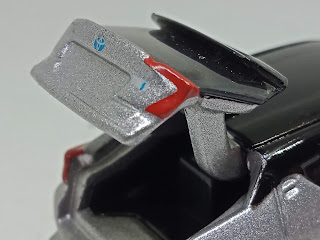 Something worth mentioning is the C-HR. The rear window on the opening hatch has a piece of plastic instead of just painted metal. Shame that you still can't see through the rear because it is assembled onto the metal. Hopefully in near future, they can do rear window with opening hatch like what Siku or Majorette has done. 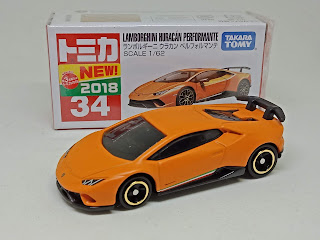 The last recent Lamborghini which was well made was the Murcielargo. That car has set a rather high standard for any Lamborghini to surpass it. Not much complaints on the Huracan except for the ugly headlights and I don't really think matte orange do the car much justice. 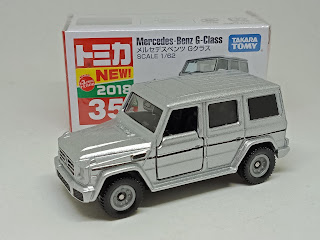 One of the more interesting model made for 2018. I hate to end its journey here because overall it's well made except for the windows after C-pillars are all painted. The vehicle is very chunky like the real thing, lots of metal for the price. You get opening doors, suspension but we are choosing the best. Sorry to G-Class and to all the people who love this model. 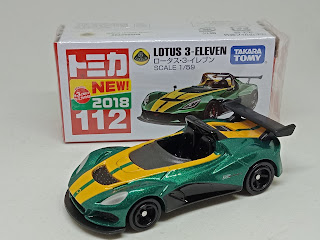 This car is well made, sweet, nice but forgettable. As I mentioned that this year build quality were vastly improve across the board so I have to give it to some other cars which deserve it more. 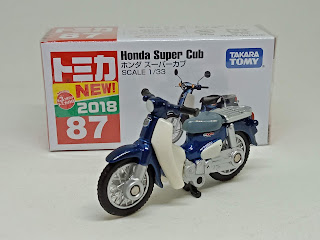 I admit that this bike is really lovable and I bought a few. It's cute and nicely made. If I were to nit-pick, it will be the wheels. The wire mesh could be more refine. 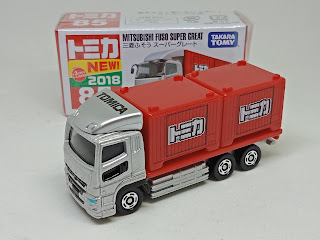 I love trucks and some trucks won the best Tomica for a few years but not this one. Perhaps it's the livery. I love to see something closer to daily life. 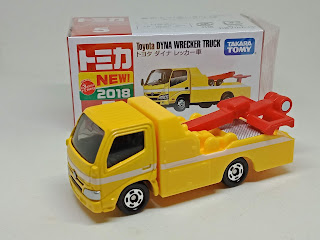 Most people love wrecker, me too but there are many better models this year. I have not much connection for this one though. 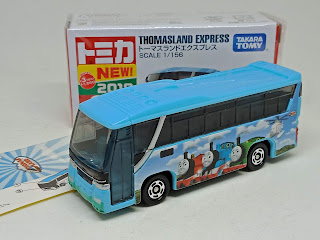 I give the chance to a new casting for the award instead. I am not a fan of Thomasland too. 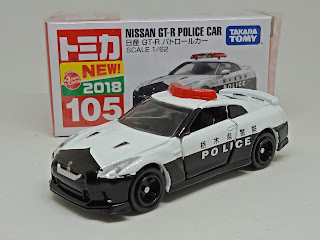 Nice car, nice livery but Tomica has made too many variant of GT-R. Still love this car though. 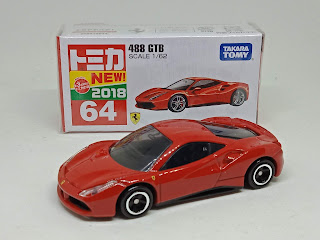 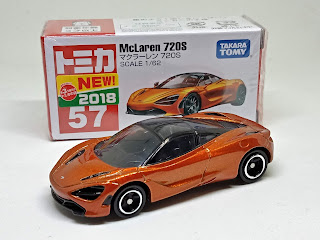 This is a well made car but kind of overshadowed by likes of Ferrari or GT-R. Commendable since this is the first McLaren road car by Tomica. I am still waiting for Tomica to release a Jaguar road car when it comes to British motoring. 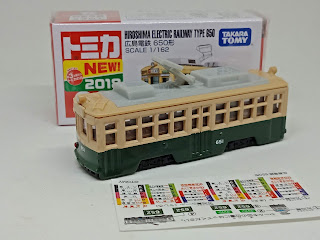 This tram reminds me of the old F68 Foreign series San Francisco Cable car when I first see this model. The details are meticulously close to the real tram, you can custom it according to your preferred service number and route with the decal sheet provided. The pantograph is movable but it look filmsy for those who think it can raise up to 90 degree. It can go only 45 degree like the real tram so don't be too harsh on it if you don't want to damage it. The tram will be almost perfect if the wheels are made of metal rather than plastic. A nice effort from Tomica. 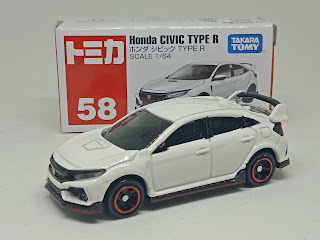 Many will compare this to the FK2 which was discontinued. This is much better effort than the FK2 to be honest although the FK2 casting started to grow on me. Save for the rear painted window and the ugly gap on the bonnet on the FK2. The improvement seen on this car are the plastic headlights and carbon fiber side skirts, front & rear lips. When I saw the car in June, I almost thought that this might be the best for the year but all the better cars are released in 2nd half of 2018. 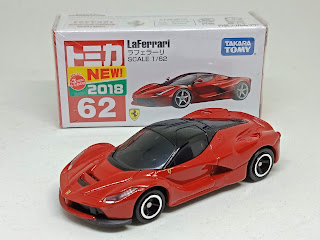 The most talk about Tomica for the year. Takara Tomy made it so mysterious but many of the collectors are still able to make out the black silhouette is a LaFerrari. The last Ferrari was made 30 years ago which is a Testarossa. Tomica couldn't make Ferrari because Mattel bought the license to produce Ferrari until May Cheong Group bought the license in 2014. Since MC bought over BBurago and it is an Italian brand, it was by nature that Bburago should continue the Italian legacy in producing Ferrari. Tomica Laferrari create a stir just by making 1 model when it was launched, perhaps it was because the brand is making this for the first time in 30 years. Bburago did not do much justice to the Ferrari die-cast since its launch in 2015. Why Tomica was allowed to produce Ferrari, nobody knows the actual story behind it. It was either MC Group approach Takara Tomy or vice-versa but on one condition that the Japanese Ferrari can only be on sale in domestic market. I have not much negative comments on this LaFerrari. It has front and rear plastic lights and the crafting of body curves and air vents is a neat job well done. 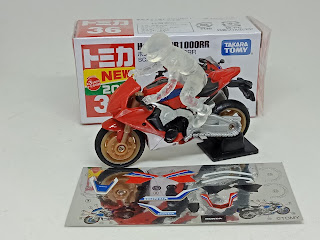 There are a lot of parts for this motorbike by Tomica. If you look closely, the bike alone requires 8 parts to assemble excluding the rider and the wheel stand. This is the first time in recent years I find that Tomica has made a motorcycle that has caught my attention. I think that if the exhaust pipe and chain guard are chrome, doesn't matter if die-cast or plastic, it will look much better. 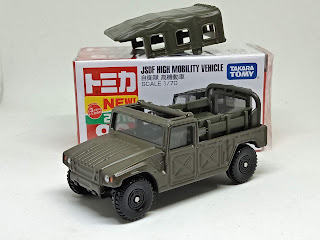 This is my original 1st place Tomica. Ever since I open all 24 Tomica, this is the car I always cannot resist touching or playing with. I enjoy just by looking at it, it is simply irresistible. I was hoping to line it up with all my black box military Tomica and I think they made a good match. The only point that I can put it to 2nd place is because of the paint, it looks a little too thick in my opinion. Otherwise, I rank it first or at least it is still the best for me. 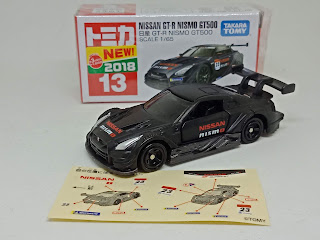 This is a far cry from the Yellow Hat or Hasemi GT-R days. It was totally not in proportions and I didn't know that it was a GT-R until I saw the box. This could be the new GT-R casting which will replace the old one for all racing variants in the future. What is not so good about this car? It has no suspension, the spoiler might go out of shape if not stored properly and the wheels are pretty small. But these are pretty small glitches simply because the pros are able to overcome the flaws. What is so good about this car? The details on the bonnet, body and side skirt all crafted onto the mould. There is opening doors now for this racing version of the GTR. What is unique is the right door, it has a different door from the driver's side door. The shut-lines on the doors are almost seamless. The overall of the car looks the likes of a GT-R comparing to the earlier version. It's really a difficult task this year because there are so many good car produced for 2018. Somehow I still prefer the JSDF vehicle.