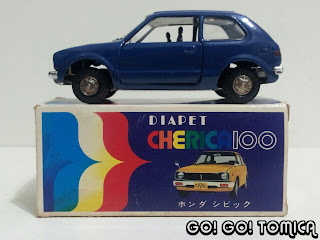 I decided to feature the first generation Honda Civic because most people I know of only focus on EG6, EK9, FD2 etc. This car deserve some credits and respect because this is the car which puts Honda on the world map. To pay tribute to the first Civic and Diapet Cherica, I picked a rare Civic made by Yonezawa. 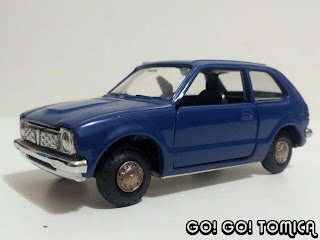 In the 1970s, the Honda Civic is just a humble runabout. It was also introduced at the right time because the world is experiencing an oil crisis. Japanese compact cars became an instant hit for being more practical than huge American guzzlers. The Kenmeri GTR was not spared for this crisis either resulting in only 197 units produced. If you are asking if there is a Type R variant, Type R only came into the scene some 20 years later. 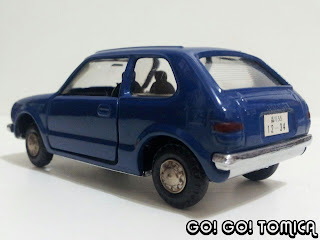 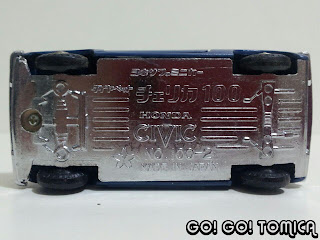 Cherica is a series under the Diapet range and produced by Yonezawa. There is Cherica 80 which I featured in my blog from time to time because they are closer to my collecting scope. Cherica 80 means that it is a Cherica which is able to fit into a 80mm box. Cherica 100 will be for cars up to 100mm. The Cherica 100 range of cars are based on Japanese compact cars. I have 3 pieces in my collection so far which includes a Subaru Leone and a Mitsubishi Minicar. Cherica 80 & 100 is a short lived series in the Diapet range so they are getting rare these day. I don't see many of these last year in Japan compared to I first visit Japan 7 years ago. 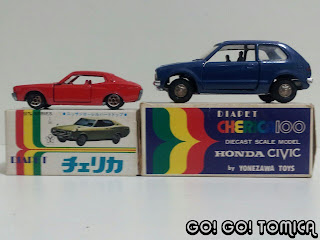 To show the difference in size of the 80 and 100, I place them together to have a better comparison. The Cherica 100 is larger than any regular Diapet and Dandy. Cherica is a series which I demand to be mint in box unless the loose car is reasonable enough to justify. To find a empty box for Cherica is really hard comparing to a Tomica box (repro excluded). I urged those who are still producing repro box to sell in eBay to stop doing that. Real collectors only appreciate original. We do not want people buying them and sell their loose Tomica as mint in original box.