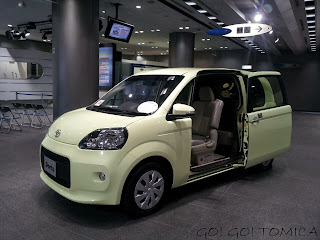 I usually stay a station away from Ikebukuro, passed by Amlux every time I go to Tokyo. I decided to visit Amlux again after my last visit in 2006. I will feature the Toyota that are made into Tomica. It's kind of fun to spot the cars in Amlux that has a miniature model of a Tomica. 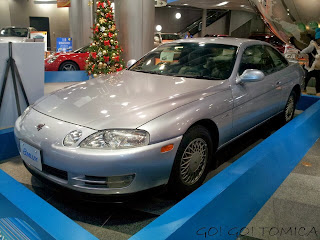 The Soarer Z30 series is also known as the Lexus SC400 in Singapore. This is the prettiest Soarer among all its generation. 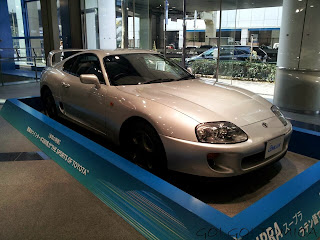 This Supra is in its 4th incarnation. It is also one of the Japanese super car of all times. Supra's roots should trace back to the Toyota 2000GT of the 60s. 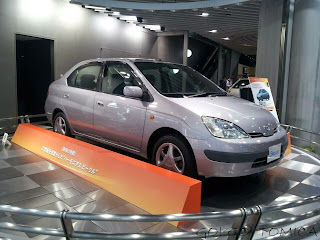 This is the first mass produced hybrid car in the world. It is also the only Prius that is available as a sedan. I sat in one in 2010 (in Japan) and the other car I was driven around is a Nissan Cima. The first generation Prius is a little noisy in the cabin switching power between fuel and electric motor. One important car in Toyota history. 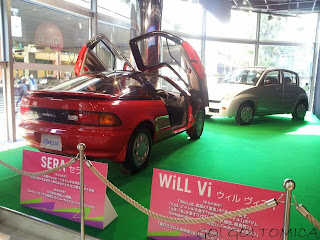 WiLL was actually a sub-brand of Toyota targeted at the yuppies who wanted a car that look totally different from the normal bread and butter cars. The Vi suffers from poor sales and resulted short production and eventually replaced by the WiLL Cypha. I find that the WiLL Vi is quite a nice looking vehicle since the styling cues are taken from cars from the 60s especially from C-pillar onwards. It's a shame that I didn't see any running on the roads of Singapore. Tomica did not made the Sera but I personally feel that it is one of the cooling coupe made by Toyota. If you compare it with the Paseo Coupe (based on a Tercel) manufactured around the same time, you will know what I mean. There are still a couple of Sera running round the streets of Singapore. 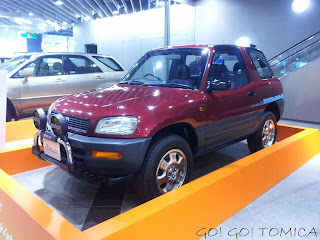 This is the best compact SUV Toyota has made yet. I still love how the first RAV4 looks especially the 3dr variant. I don't really like all the RAV4 that replaced the first generation. 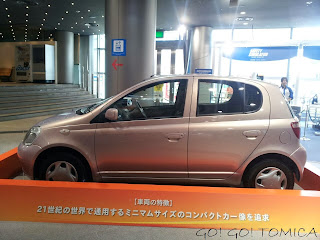 The Vitz should be the answer to the Starlet replacement after the name was discontinued. I remember the first Vitz or Yari has a sedan which was known as a Echo in Singapore. The latest incarnation of the Vitz/Yaris sedan is the Belta or known as a Vios in South East Asia. 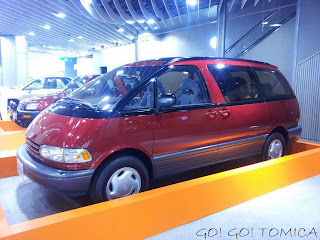 The first Estima / Previa is still the nicest of all Estima generations. It was a crossed between a van and a car. The design was to target the American market where minivans are proved to be the most popular vehicle among families. The first Estima always reminds me of a spaceship due to the airy design. 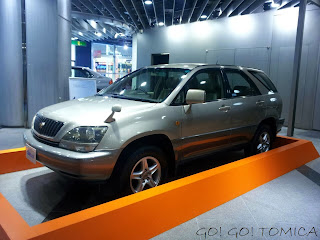 This is the first generation of Harrier. I know that Tomica made the 2nd generation but it's nowhere found in Amlux. Harrier is a popular SUV in Singapore regardless being badge as a Toyota or Lexus. The budget conscious will buy the Toyota version and some owner gave it an instant upgrade by replacing the Toyota badge with a Lexus badge. 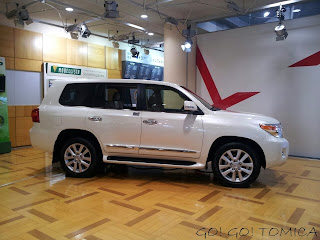 There is still a huge following of the FJ40 Land Cruiser. It was supposed to be a budget Land Rover of the east in the 50s. Most cars in Japan during the 50s to 70s are inspired by Americans or Europeans. The 200 series is a mammoth size SUV that dwarfs many cars on the road. I prefer the latest Pajero if given a choice. 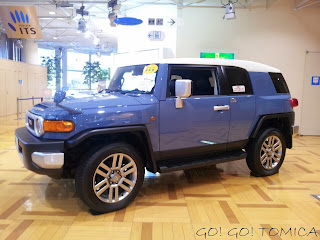 I prefer this Cruiser over the 200 series above. It has a closer relation to the FJ40 as the Land Cruiser today are more luxurious rather than rugged. Me and my friend can't help but to explore more inside the vehicle. The car is spacious and the suicide doors are a cool feature. It look best when view from the front. 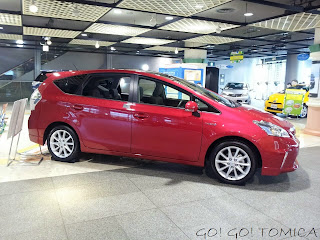 Prius Alpha is based on a Prius but longer and seats more than a standard Prius. Strictly for people who wanted to ferry more people in a greener way. 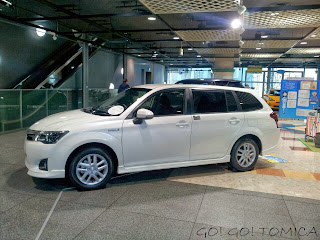 The latest Corolla Axio is smaller than the outgoing model. No problems for that but it seems like the Corolla in Japan are position in the budget segment now. The interior looks it was built on a budget and a Kia Cerato looks more upmarket now. 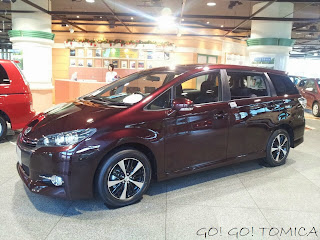 Singapore most popular MPV of all time after the fall of the Spacewagon. 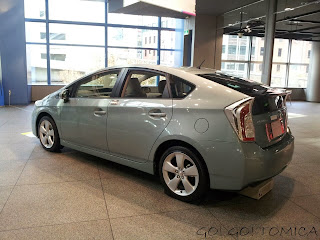 3rd Generation of Prius. Who doesn't want to be seen in driving one? 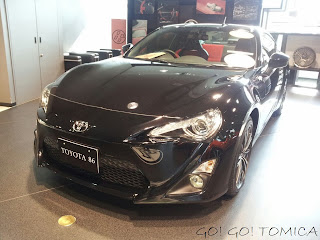 It's the most popular car in Amlux and in Tomica world now. 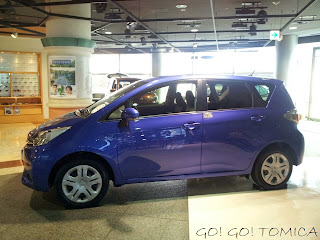 It's based on a Vitz but taller. Think Golf Plus. 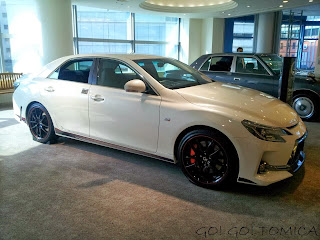 I prefer the predecessor's styling. This is the sportier Mark X G's developed by its racing partner, Gazoo Racing. 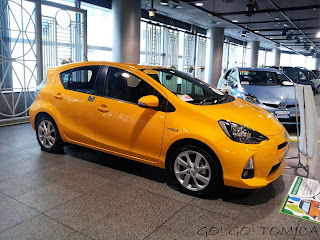 Toyota Aqua (Tomica No. 98)
It's sold as a Toyota Prius C in Singapore. Basically a shorter Prius about the size of a Polo. I like the yellow, my favourite colour. 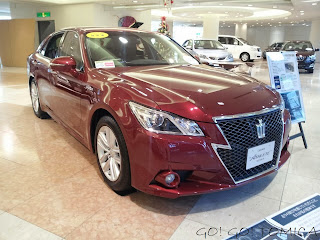 Tomica will be releasing the latest Crown in February 2014. It's the fiercest Crown I have seen in recent years especially the super huge grill. The double trapezoid grill looks like the shape of a crown and it's very intimating for a luxurious car. The interior looks bland though which is usual for a Crown. 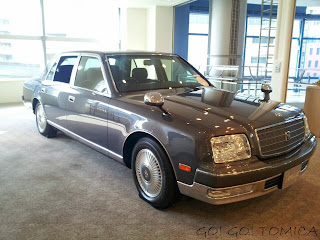 This is my favourite car in Amlux. I nearly took a nap in the car because it is so luxurious. I took numerous photo of the Century back in 2006 too as I simply love large sedans. The Century might look a boring car as it is used mainly to ferry Japanese CEO but I like the classic look of the car. I am glad that Toyota did not change much styling from the first generation (1967~1997) to the outgoing model. Truly a flagship of Toyota.