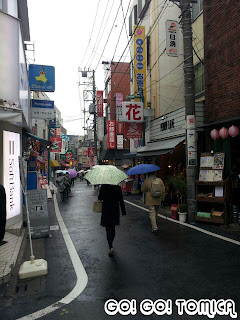 I decided to visit Shimokitazawa early thinking that we will be able to buy more time for the day. I was wrong, because most shops operate from 1100hrs or 1200hrs and we are pretty early at 1000hrs. What made our day worse was the weather. 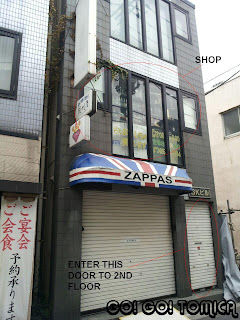 I planned for Shimokitazawa because this is where you can find vintage stuff or 2nd hand clothing. Not so much into used clothing but if there are clean pieces from the 60s or 70s, why not? We were there for 2 shops basically. One of the shops is selling vintage toys as shown in above photo. Not "Zappas" but the shop on the 2nd level. We are waiting for the shop to open while sitting in MOS Burger nearby, finally the shop owner arrived at around 1230hrs. That was a long wait. We hoped to depart Shimokitazawa by 1400hrs so that we can continue our journey for the day. 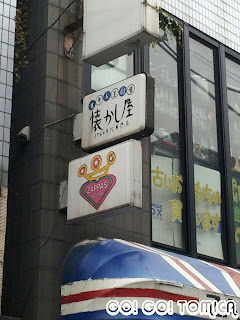 Closing up on the shop name. I don't know how to translate the shop name into English but I'll try if you like to know. 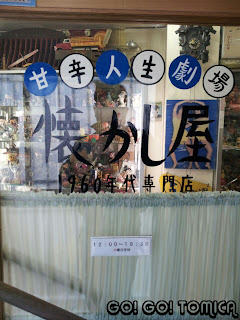 Translating respective lines, "Taste of Dramatic Life", "House of Memories", "1960s Specialist Shop". I hope I got this right. I got hold of the shop owner's card and it's in Japanese. I think his name should be Ueno Risaburou if I managed to translate it correctly. Ueno San do not allow photography in his shop so I just took a photo of his main door. It's a small shop with many old stuff and I am interested on his "minicar" only. He has 2 small display case with toy cars in the store. As I was looking at the cars, Ueno San asked me if I am minicar collector and we exchanged cards. I am interested in his Tomica, Lone Star and Playart (badged as Masudaya) but based on the asking price, I think I will just focus on the Playart. The Playart he had are Japanese cars which I was looking for. I asked if he had more of these and he did a search in his "store" which was behind his counter where he sat. He dig out a box full of MIB Lone Star, Playart and Matchbox. I decide to do a bundle sales and negotiated on the price to buy out his Playart. Actually it's not many pieces, 5 in all so it's not too expensive to buy them out. All cars in the lot are Corolla and Sunny. My friend, Keong, did get a Lone Star as well as he never had one so I bundle it up as well. Considered a good buy for first shop of the day and good deal for Ueno San since we are the first customers right after he opened for business. 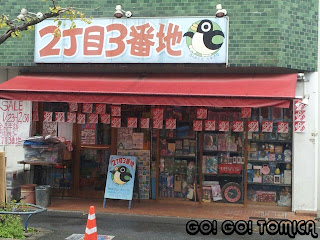 I know how to translate the shop name. 2 Banchi 3 Chome, more of like an address but it is really the name of the shop. I have seen this shop as I have been buying stuff from Yahoo Japan and this shop is no stranger in the auction site. The time is 1300hrs and raining. The shop owner said that he need 30 mins to set up the shop so we waited till 1330hrs before we can enter. 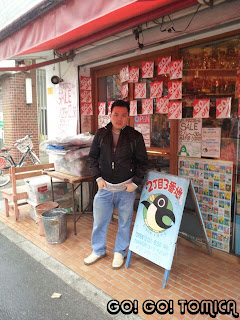 As photography is not allowed, I will not show you the stuff inside the store but you can see visit the shop in YouTube as someone did a video. We were lucky as they were having 50% discount store wide. This shop has everything from toy cars to figurines and from Japanese toys to American toys. As for the pricing, I would say the price sounds more reasonable after discount of 50% otherwise I will not consider. I did not buy any cars here as most of the cars are not mint and some in junk condition. I bought a Evil Kenevil figurine and a Pokochan doll, sounds so unlikely of me to buy these stuff but strange enough, I like these toys although I am strictly a toy car person. We spend an hour there and we hurried off to Tokyo Station as today is official release day for Tomica new model. 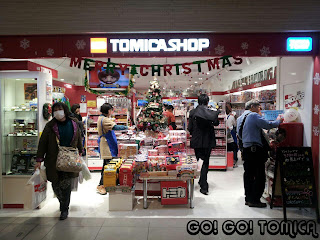 I don't want to tell you what I bought but I know that you might be thinking I should be the happiest person on earth that day. Not really! I never really enjoy shopping here because not many stuff excites me here. I managed to spend slightly more than 17,000 yen anyhow as I was doing it on behalf for my cousin. I went to Tomica Shop so that I can make my post a little more complete since a major portion of my followers are beginners on collecting Tomica. 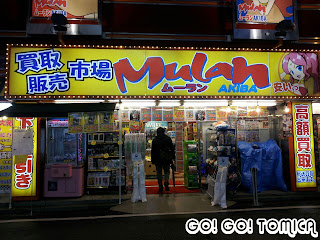 Next, we went to Akibahara. It was dreadful for me because I don't collect figurines. It was interesting for Keong because this is his first time for everything and he would like to see, try, touch, taste anything that comes along the way. 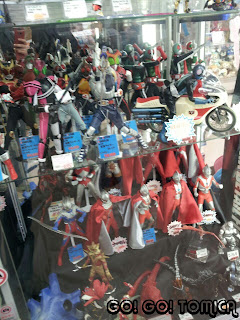 I can only accept Ultraman figurine as I do have Ultraman toys at home as well. It was like hell in Akiba for me rather than heaven. 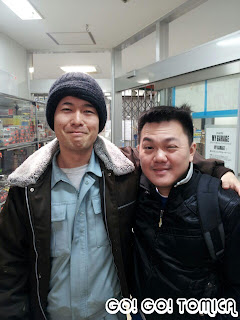 At 1900hrs, I am supposed to meet my friend, Tonegawa, in Gulliver. Tonegawa owns a Kenmeri Skyline who turns a Tomica collector years ago. As my favourite Skyline model is the Kenmeri, Tonegawa is my "hero". He told me he nearly completed collecting all variations of Tomica Kenmeri Skyline. It's a pity that his car is under restoration and the whole project will take 10 months to complete. I haven't seen a Kenmeri in person and maybe my next trip to Japan, his Kenmeri should be ready for my camera. For those who are reading this thinking what is a Kenmeri but dream Skyline as their dream car and only know what is R32, R33, R34 and R35, I think it's a joke to dream Skyline as your dream car if you do not know much of Skyline history.

Here is a link to the blog of my best friend in Japan.
http://blog.livedoor.jp/junktomica/archives/51375535.html 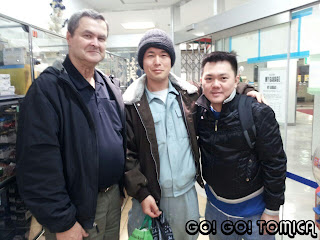 Bob is the man who was helping us taking the above photo of me and Tonegawa. When I reached Gulliver, I met Bob again for the second time. First time was in II Ado on day 1 of my trip. Bob was talking to Nakata San, owner of Gulliver, because they are old friends. I asked Nakata San to help us take a photo because I forgotten to do that when we met in II Ado. I was too excited that day because II Ado was my first minicar shop visited after 2.5 years. I discussed with Bob of visiting the Wonderland Market together tomorrow as it is the "highlights" of the whole trip (for me). After that, I went coffee with Tonegawa before going back to hotel. Tomorrow is the "big day" for me, my reason for visiting Japan again is for the Wonderland Market. I will try to show more of Wonderland Market on next post. Keep following.